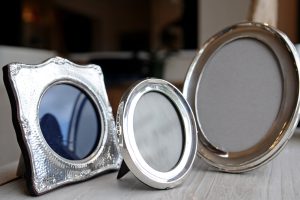 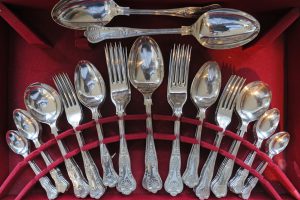 Britain has produced some of the finest silversmiths over the centuries, thanks initially to the Guild system which created close working units that were surprisingly similar and encouraged new ideas and styles as well as high standards.  The Assay laws were enforced by the English Hallmarking system which was initially introduced as early as 1300,  making it much easier to date and place a particular piece of Silver, and to validate its authenticity.

Silver is eagerly sought after, not only for its beauty but also its value, and offers enormous scope to collectors. It has been displayed through the centuries as a sign of wealth and importance within families and Institutions, whether coming from fine and modestly wealthy homes or collections, silver, like gold, has the added bonus of being used as insurance against financial necessity and economic downturns.

Small collectables such as wine labels, grape scissors, decorative boxes, spoons and vesta cases appeal because they fit easily into small display cabinets and can be found at Hartley Antiques where dealers also trade in quality items such as; snuff boxes, vinaigrette, cruets, trays, candle sticks, fine candelabra and above all dining flatware.